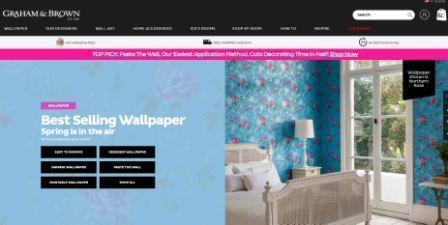 Started by two dear friends, Harold Graham and Henry Brown in 1946, with very little between them except foresight and friendship. With the severe shortage of paper following the War, Henry and Harold cleverly procured a large supply of surplus metallic paper, an eight-colour surface printer and a new embossing machine, with which the two men began a wallpaper revolution. The public, desperate for things to help brighten up their homes following the hard years of war, snapped it up so fast Graham & Brown could barely meet demand. The company grew quickly and prospered until the energy crisis of the Korean War in the early 1950s and the tragic early death of Harold Graham at 39.

The 1970s saw Graham & Brown producing millions of rolls of wallpaper a year, establishing the company as one of the largest independent wallpaper manufacturers in Britain and a growing force in Europe. New ideas in wallpaper were introduced like washable vinyl wall coverings.

Through continued innovation and creative thought, Graham & Brown launched its now famous Superfresco brand, which was then, as now, easy to hang (and take down), could be painted or washed, and was the first range the company advertised on TV. Its iconic ‘what goes up must come down…’ TV advert was so memorable that it was used again in the late 1990s.

During this time, Graham & Brown were producing wallpaper as quickly as it was flying off the shelves. By 1984 the company had more than quadrupled its market share and tripled turnover, and Superfresco went on to become the best selling wallpaper brand in the world, available in over 50 countries. With a third generation of Graham & Brown family members now on board, the company’s ambitions took a step further in the late 1980s with continued investment in machinery to allow them to make new pre-pasted products and a fresh TV campaign.

The 1990s brought further innovations and by 1992 Graham & Brown produced the world’s first ‘batchless’ wall coverings and by the turn of the century the company were promoting another innovation, ‘paste the wall’ technology to a contemporary audience via a new TV campaign. New associations were forged with designer Laurence Llewelyn-Bowen who was quickly followed by Linda Barker , hemingwaydesign , Jans des Bouvrie, Marcel Wanders and most recently Kelly Hoppen.

International expansion that had begun with the United States has grown in the last decade to see divisions established in France, Holland, Russia, Canada, and China, with the latest addition to the fold being Graham & Brown, Germany. Innovation of thought and action has seen the company drive the industry from the doldrums into growth.

We will publish our review soon, please rate and review your experience with grahambrown.com down below to help your fellow shoppers.

Read 1064 times
Tweet
back to top
© 2018 ShopOnline.Support. All rights reserved